Discoveries and Innovations contributing to Building Construction and Real Estate

Ten thousand people occupy approximately one tenth of the average football stadium of today and I have difficulty creating a family tree with more than three generations.

Today’s world population is said to be over seven billion with over 314 million in the United States.

The thought of these first humans building shelters or habitats inspired me to research the Internet (Google searches by “History of” and topic) for discoveries and innovations contributing to Building Construction and ultimately Real Estate.

Here are my findings:

These first humans owned a lot of land.

Africa, Asia and Europe BC discoveries included the Hammer (Stones for striking wood and bone), Drill (pointed rock spun between hands) and Tongs (sticks for handling fires) were the first tools followed by the Shovel (Ox shoulder blades used to move soil and rock), Saw, Rope (from water reed fibers) and bronze nails.  The most significant America discoveries are AD via Europe.

Here are a few of the most significant (in my opinion) contributions in chronological order by continent: 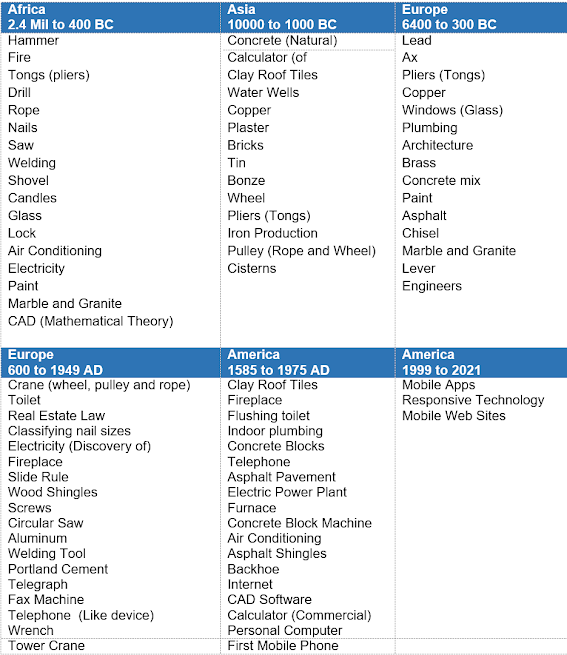 Comments welcome with any overlooked and/or additional contributions to the Building Construction and/or Real Estate Industries.
Posted by Gary at 1:45 PM