Building the greatest non-wall structure between the United States and Mexico (Continued from the March 13, 2017 posting)

Following this initial post on March 13, 2017 on March 14, 2017 we received an e-mail from Kevin Quealy, a reporter from the New York Times because our company was among the 647 listed in the “Interested Vendor List” of the Design-Build structure for the design and build of a prototype wall structure in the vicinity of the United States border and Mexico.

His e-mail asked if we were willing to share a “sketch or design advice of any kind to the customs and border protection” because he thought “readers will be interested to see how different companies envisioned this structure, particularly since aesthetics will factor into the final decision.”

As a courtesy we telephoned Mr. Quealy mentioning that we had no sketches but we had posted some design advice on our web site’s blog at http://constructionplace.blogspot.in/.

Here are the visions of the two Options we posted on our web site Blog on March 13, 2017:

Optionally, tower like structures or poles for cameras and other surveillance equipment are on or adjacent to the wall and spaced at strategic distances and locations;

An occasional drone is hovering overhead;

Debris and garbage from wind and humanity is seen at the base of either side of the wall;

Occasional homeless shelters are observed next to the wall;

As needed draining systems are placed to prevent erosion and flooding; and
Sensor devices for detecting/locating tunneling activities because as the wall footings/foundations get deeper the tunnels are deeper thus making them more difficult to discover.

A variety of strategically located open fence like systems/structures or boundary lines (the border line) traversing a variety of terrains, ranging from major urban areas to uninhabitable deserts;

Tower like structures or poles for cameras and other surveillance equipment are placed along the border line at strategic locations and distances;


An occasional drone is hovering overhead;

High tech equipped mobile homes with DHS (Department of Homeland Security) logos are flying American flags can be seen at strategic locations and distances along the border; and

If and when deemed appropriate both American and Mexican security officers will be seen periodically sharing the Motor homes for surveillance and patrolling activities in their respective areas.

The stories included thoughts from ranchers along the United States and Mexico border such as “I don’t care what they build.  They’ll climb over it or they’ll go under it” and “No matter what they build on the border, it isn’t going to stop the traffic”.

And weeks ago we read in a local newspaper about another contractor on the “Interested Vendor list” who believes the Design-Build Border Wall structure will not solve the expressed Illegal Immigration and drug trafficking problem(s) from Mexico but he will still bid on the project because he wants the work.

We would like the work also but as Construction Managers with General Building Contractor licenses in California and Hawaii we feel obligated to tell our clients (1) when we believe their proposed project will have little or no impact on solving their problem; and (2) when we can offer other project scope options for consideration.

Therefore, we think readers would be more interested in seeing design advice that will solve the expressed problem including designs that are aesthetically pleasing.

DESIGN
A graphical representation consisting of plan views, interior and exterior elevations, sections, and other drawings and details to depict the goal or purpose for a building or other structure.

In other words, we design structures to depict a goal or purpose usually based on a promise that we have made to ourselves or others to solve a particular problem with a specific intent.

But sometimes we come up with more than one option to solve that particular problem. In such case it is prudent to choose the least expensive solution (Design) that satisfactorily produces the intent of the promise.

Comments, thoughts and/or other Options Welcome!

Clink on the below link to read about great border walls:

Problem:  Illegal immigration from Mexico into the United States via Illegal border crossings

Option 1 – The Department of Homeland Security, Customs and Border Protection (CBP) is currently soliciting for the Design and Build of several prototype wall structures in the vicinity of the United States border with Mexico. The total length of this continental border structure would be approximately 3,201 kilometers or 1,989 miles long if completely built and traverse a variety of terrains, ranging from major urban areas to uninhabitable deserts.  As of January 26, 2017 the estimated cost to build this proposed wall is $15 to $20 Billion Dollars without the benefit of a design and construction documents.

Advantages: None that we can think of at the moment

Option 2 – Build a joint task force mobile security system along the entire United States and Mexico Border using mobile homes, current fence deliberations by the United States Senate, and high tech surveillance equipment.  This option will divide our two countries with a secure open visible boundary line that traverses over a variety of terrains, ranging from major urban areas to uninhabitable deserts.  This option is currently estimated at $2 Billion dollars (see the Senate's estimate in item 2 below) plus our estimated costs for mobile homes at $100 million and high tech surveillance systems/equipment and training as determined by the Department of Homeland Security.

Advantages: Optimal visibility, low maintenance, minimal environmental and construction issues while creating the perception of building good will and better friendships; and a security system that would be fair and beneficial to all concerned.

Disadvantages: None that we can think of at the moment

1. Mobile home stations - Use mobile homes placed every 1 to 2 miles or as determined by the Department of Homeland Security. Mobile homes will be self-sufficient with water, propane, electrical generators, mobile devices, and surveillance equipment allowing the mobile homes to easily relocate at any time and without notice along their assigned boarder territory. 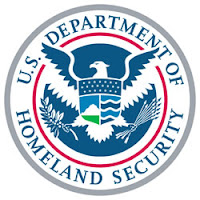 2. Complete the current Border fence deliberations by the Senate (from Google Search)

The fence would have high tech sensors for detecting breaches and/or tunneling activities connected to their respective mobile home stations.

3. Homeland security personnel – One Homeland Security Officer from the United States will occupy each mobile home.  Optionally, if appropriate, one officer from Mexico will join and occupy a mobile home with the United States officer. Officer(s) will patrol their respective area using 3 wheel and 4 wheel drive vehicles.  And conduct border surveillance using surveillance systems/equipment in their mobile home stations and/or vehicles.

4.  Border Management and chain of command - The respective State/County Sharif’s Departments would oversee the border, mobile home stations, and personnel in their respective states (from west to east, are California, Arizona, New Mexico, and Texas).The Sharif’s offices would coordinate with the Department of Homeland Security.

Here is a brief design for gathering study for the aforementioned options: 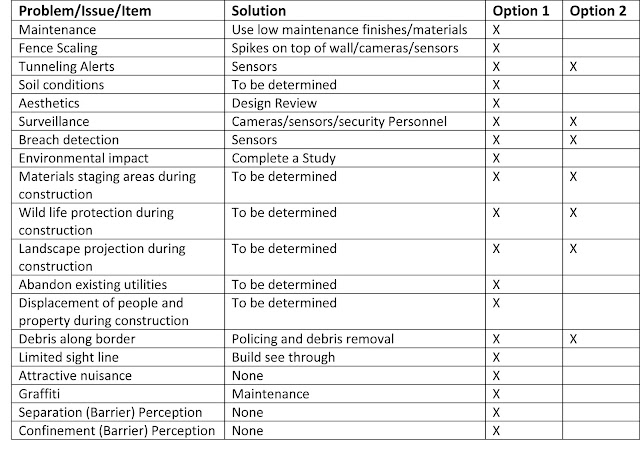 Conclusion - Don’t build something that will deteriorate and/or be torn town over time or that inhibits a good neighbor relationship. Build something that will symbolize American ideals and mutually withstand meaningful humane political aspirations.  The message – “America is a Country of secure openly visible borders and it’s easier to come to America legally.”

How is this for a possible solution to solving the illegal immigration problem from Mexico that can be mutually beneficial and save the United States tax payers lots of money?